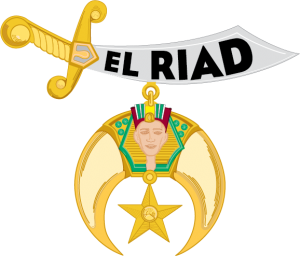 We are excited to work with the El Riad Shrine as our hosting venue! Not only is their venue space amazing, but they do so much for others! We have enjoyed getting to know these great guys and look forward to a long partnership for years to come!

Shriners International is a fraternity based on fun, fellowship and the Masonic principles of brotherly love, relief and truth with nearly 200 temples (chapters) in several countries and thousands of clubs around the world. Our fraternity is open to men of integrity from all walks of life.

Featuring: On The Fritz

From 1961 to present A.S.O.B. Ladder of Smiles has contributed over $2.4 million dollars to the hospital endowment fund (Shrine Endowment Fund). Over $600,000 of that money has been collected in the last five years. The check for 2011 alone was $151,230. Obviously our support of the Shrine Endowment Fund is greatly appreciated by Imperial.

A term you won’t hear associated with the Ladder of Smiles is “Net Proceeds”. What that means is, that after all overhead, administrative and other costs have been deducted, the Net Proceeds are sent off to the endowment fund, specific hospital or whatever.

The real secret of the Ladder of Smiles is that all funds contributed are “Net Proceeds”. There is no deduction for all of those other things because there aren’t any. What limited administrative costs we do have, stationary, postage, etc. are covered by a portion of your dues. Everything is accomplished by your officers and appointees without charge. Therefore every dollar donated to the Ladder of Smiles goes where you expect and it is supposed to go, straight to the endowment fund. This completes the basic Ladder of Smiles segment. The last segment dealing primarily with the 100% participation program is in work and should be ready for the next ASOB update.